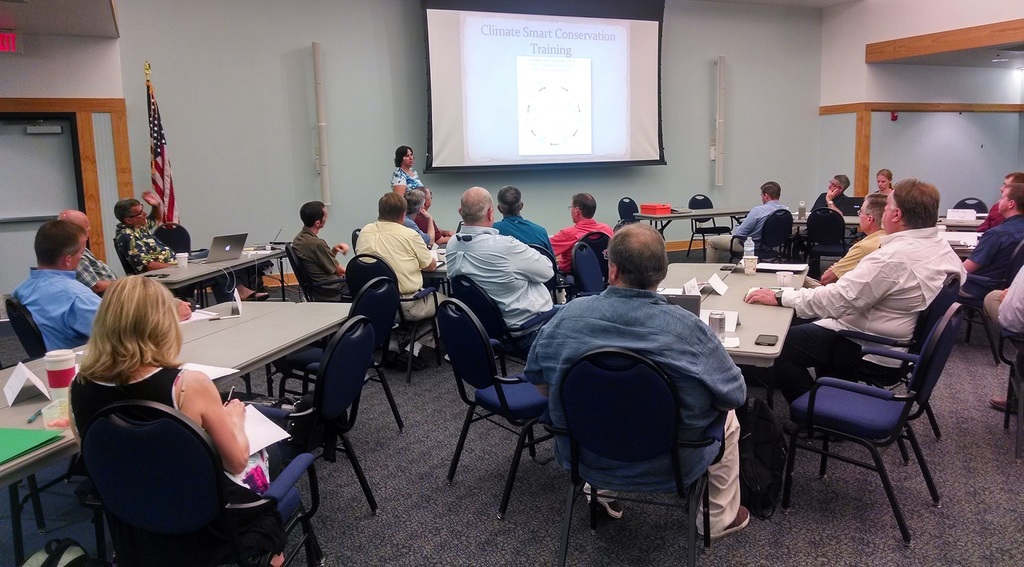 LCCs are self-directed partnerships between federal agencies, states, tribes, non-profits, regional organizations, universities, and other entities dedicated to achieving a landscape capable of sustaining natural and cultural resources for current and future generations. The 22 cooperatives within the LCC Network collaboratively define science needs and jointly address broad-scale conservation issues, such as climate change and urban growth. The South Atlantic LCC spans parts of six states from southern Virginia to northern Florida, including U.S. waters out to 200 miles offshore. The Peninsular Florida LCC shares the South Atlantic LCC’s southern boundary and focuses on conservation in the state of Florida.

The South Atlantic LCC elected new Steering Committee officers, incoming Chair Rick Durbrow with the Environmental Protection Agency and incoming Vice Chair Jon Ambrose with the Georgia Department of Natural Resources.­ Durbrow said, “the strength of our organization is the diversity of our membership.”

In the words of Ernie Cox, the new Peninsular Florida LCC Steering Committee Chair from Family Lands Remembered, “Working together with our partners and landowners, we have a great opportunity to implement conservation on the ground.”

The team shared on-the-ground conservation accomplishments and discussed new cross-boundary opportunities, such as focusing together more on the high priority “Big Bend” or “Nature Coast” of Florida. In the South Atlantic LCC, a major success is the design and implementation of the Conservation Blueprint, a living spatial plan that identifies opportunities for shared conservation action. It is already being used by Federal, State and local decision-makers to identify conservation priorities and guide conservation action and investment.

The Blueprint, ecological indicators, and strong partner relationships helped secure $1.75 million from the Department of Interior’s Wildland Fire Resilient Landscapes program in the first two years of the program alone. The funds will support prescribed burning in priority longleaf pine focus areas, benefiting rare species like the red-cockaded woodpecker and reducing the risk of catastrophic wildfire. In 2015, the Blueprint also helped bring in $4 million dollars in grants from the Forest Legacy and National Coastal Wetlands Conservation Grant Programs to fund the protection of thousands of acres of diverse habitats in Georgia and South Carolina. Since the release of the first version of the Blueprint in 2014, conservation practitioners and decision-makers have used the Blueprint in at least twenty different projects.

The group also explored how richer collaboration between LCCs in the southeastern United States and expanding use of the Conservation Blueprint by different partners can inform larger investments and have even more dramatic positive impacts.

In April 2016, the BP Deepwater Horizon settlement for Gulf restoration activities was announced. These funds, totalling billions of dollars, will be paid out over the next 15 years and support conservation in the Gulf region. The Conservation Blueprint and complementary spatial conservation plans from neighboring Gulf LCCs will help the Gulf RESTORE Council make strategic land protection decisions by identifying connections between estuarine and marine habitats, improving resilience in the face of sea-level rise, and providing big-picture insights.

“This was a critical meeting,” observed Roger Pugliese from the South Atlantic Marine Fishery Council. “What we accomplished was far beyond what I thought we could accomplish…really moving things way down the road.”

The meeting concluded with a shared commitment to continue the cross-LCC dialogue and strengthen communication in the future. Both Steering Committees recognized the many benefits of networking and learning from one another, and the potential to accomplish more by working together.