Blog post: Why a Wildlife Biologist Cares About Longleaf 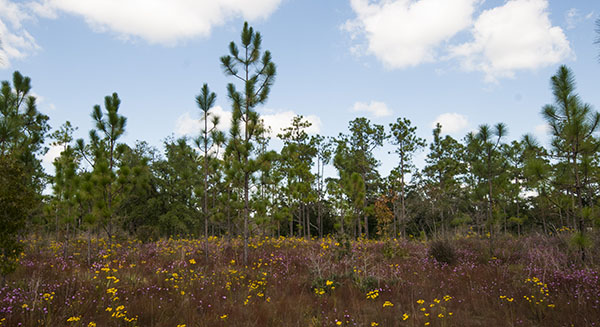 Why a Wildlife Biologist Cares About Longleaf

A blog by Arlo Kane

As a private lands biologist I spend much of my time helping private landowners who want to improve their property for wildlife.  Managing wildlife means more than just managing the population, in means managing the habitat.  For wildlife that inhabit a pine forest, the species of pine that makes up that forest is important.  Especially when it comes to managing that forest over time.

A longleaf pine ecosystem is one of the most diverse ecosystems on the planet next to the tropical rainforest. It is also one of the most endangered systems having been reduced by 97 percent of its former range.  But it’s only one species.  How can there be much diversity when we are talking about one species?  For that you have to look down.  As a wildlife biologist I spend much of my time in the longleaf ecosystem looking at the ground. That’s where you find the diversity. Although the longleaf pine is the dominant feature of the landscape, it’s the ground cover that makes it so important to wildlife.  A longleaf ecosystem can have over 40 different species of plants in a square yard.  Now that’s a diverse ecosystem.

If it is the understory that is so important then why do we care about what species of pine occupies the overstory? It gets back to the idea of managing habitat for wildlife. Longleaf has many beneficial features that other pines do not. First, understand that southeastern habitats evolved in an environment of frequent lightening fires. Historically lightening fires burned the landscape on a one to three-year basis.  These mostly summer fires kept hardwoods in check and pine species that could not handle fire at a young age were killed or survived mostly in the wetter areas along streams and bayheads that fire didn’t usually reach. Longleaf’s features allow it to survive fires when very young. In the “grass stage,” the bud is protected from fire by the long needles that fold up around it as fire approaches and protects it until the fire passes.

Another important feature of longleaf is its open structured canopy. Mature longleaf branches are open enough that more sunlight passes through the canopy to reach the forest floor. Unless sunlight reaches the forest floor there will be no groundcover, which means no food or cover for many species of wildlife. Longleaf also has a much longer life span; up to 500 years.  It produces more resin and is susceptible to red heart disease as it reaches 100 years old. That is important to red-cockaded woodpeckers because the red heart makes excavating a cavity easier, and this is one of the few woodpecker species to create cavities in a live tree rather than a snag. The higher resin content allows the birds to create predator defenses by pecking resin holes below the entrance, which makes climbing the tree by rat snakes a sticky mess they won’t tolerate.

What about the other commercial pine species? How do they stack up for wildlife? Slash and loblolly pine are not fire resistant at a young age and you usually can’t burn them until they are about eight to 12 years of age. A lot of brush can invade a forest in that much time. Their canopies do not have as open a structure as longleaf and usually are planted at too high a density to allow much sunlight to reach the forest floor. A mature heavily thinned slash or loblolly forest is not necessarily bad for wildlife, structurally the overstory can be suitable for many species of wildlife. It’s the early ages where burning is restricted and the older ages where the shorter lifespan of these species becomes a problem for certain species of wildlife.

So back to the original question: why does a wildlife biologist care about longleaf? Because it gives a wildlife biologist the flexibility to manage with fire from an early age to promote the understory grasses and forbs that are so important to wildlife. Plant succession marches on if we do nothing, so a pine that allows us to manage for early successional stages is valuable. Longleaf does that better than any other pine species in the southeast.  If you are interested in managing your property with longleaf contact your nearest Florida Fish and Wildlife Conservation Commission landowner assistance biologist or an NRCS district conservationist.

Are you interested in having longleaf pine on your property? If so, the Natural Resources Conservation Service  provides technical and financial assistance to manage and restore longleaf pine. Learn more at your local USDA service center.