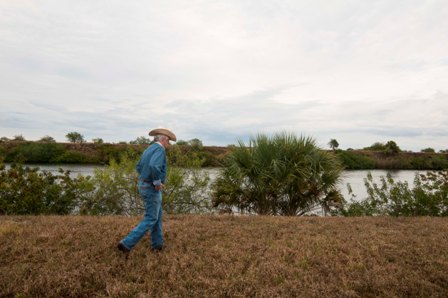 Dwayne House walks along the Caloosahatchee River on his ranch where he has created a conservation easement that will protect a crossing for the endangered Florida panther.

GAINESVILLE, Fla., Oct. 20, 2014--Dwayne House has lived everything he dreamed of.  A successful businessman, an international investor in power generation, construction, oil exploration, agriculture; it would be hard to name a place in the world he hasn’t been. But he will be the first to tell you that wealth isn’t measured in money.  It is having that ability to control your own time. And what he wants to do with his is to be a rancher. “I am very independent; and independence and ranching go together,” he said.

It was a challenge. Dwayne was one of 10 children growing up in Middleton, Md. “We were poor and didn’t know it,” he said. But when he was 8 Dwayne knew he was going to be in international business and travel the world. He worked his way through college studying economics and finance, and his first employer out of college, Ford Motor Company, had to send him money so he could come to work.  Since then he has mostly worked for himself in a variety of businesses and investments. “I like the frontier attitude, and one of the last frontiers is the cattle business,” he said.

Dwayne purchased the historical Goodno Ranch about eight miles east of LaBelle, Fla., 17 years ago from developers who were going to build a village of 22,000 homes.  Since then Dwayne has acquired more land adjacent to the original holdings, owning and leasing about 10,000 acres. “We are a cow, calf operation, shipping our calves in September, most of them go to Oklahoma and Texas,” he said. Dwayne lives in Miami where he owns a business, but spends several days a week at Goodno, getting up at 5 a.m. to feed the horses and chickens, check the cattle and work on the equipment.  When he is in Miami, his ranch manager and two hired hands take care of Goodno.  “We still ranch on horses, I enjoy it,” he said.

But Goodno Ranch is in a unique location, next to the narrowest point of the Caloosahatchee River, in an important corridor where the Florida panther can cross from the south to the north.  Biologists and naturalists wanted to provide a protected passage on Dwayne’s land to the north where more available habitat could increase the panthers range and expand their numbers.  According to the Florida Fish and Wildlife Conservation Commission, the federally and state listed Florida panther is a species on the edge of extinction - less than 200 Florida panthers exist in the wild. Urbanization has pushed the animals to carrying capacity south of the river, making the corridor vital.

Dwayne enrolled 718 acres into an easement program in 2012 with USDA’s Natural Resources Conservation Service to protect it. “My objective was to keep it in natural Florida; running cattle like it has been done for 200 years and keep development off of it,” he said.

The program enables landowners to contract with NRCS to establish permanent conservation easements to spare the land from development and restore previously drained wetlands.  NRCS staff is working now on the restoration plan that will direct planting trees and vegetation to give the panthers cover on their way to cross the river, with work starting next year.

Dwayne enjoys continually improving how he manages his cattle and land. Instead of buying a Porsche for a recent birthday present, he decided to get a Caterpillar loader instead, so he can remove the invasive Brazilian pepper tree growing on his range.  “I want to prepare this land and keep it so it stays like it was when Ponce de Leon came through here, the creatures that lived here are still here, and you can look at it and say, ‘This is the way cattle operations were and still run.’”